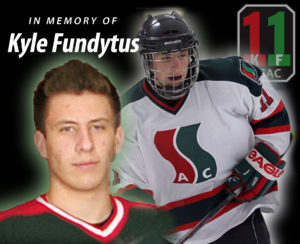 On November 12, 2011, Kyle Fundytus, playing for SSAC Midget AA Don Wheaton, went to block a shot during a game. The puck struck an artery in his neck. Kyle tragically passed away the next day. By 2013, Kyle’s father Laurie led a campaign to name Mill Woods A arena after his son. On December 22, 2013, the city held a dedication ceremony to officially name Kyle Fundytus Arena along with placing a commemorative bronze plaque.

From 2012-16, two Midget AA players per year have been awarded scholarships from the Kyle Fundytus Memorial Fund at the SSAC Annual Awards Banquet in the spring. Midget AA scholarships continue to be awarded annually.

The club, all those who knew, remember and now know about Kyle pay tribute in remembrance.