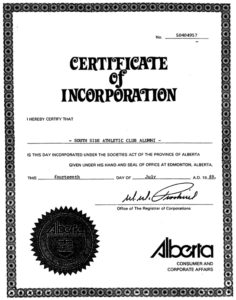 Why an Alumni? The SSAC desired to make contact with former players, parents and team personnel with the objective that an Alumni could assist the Club with another source of funding to provide enhancement of the hockey program. Also, a forum through which there can be contact with people previously involved with the hockey operations and in combined effort with the SSAC Executive work towards the establishment of some kind of physical identity. This would be a club house, meeting space and/or rink so as to allow the display of past history and at the same time work towards providing even a stronger program for the future.

The 1st order of business for the Alumni was to meet with the old South Edmonton Athletic and Sports Association. The members of that group then exisitng was the President Harold Turnbull, Treasurer Charles Howell, Directors Pat Gaudet, Jim Layton and Colin Leslie. This organization had provided athletics of various kinds and horse racing in South Edmonton back in the year of 1937 and for some years after. This was a group of South Edmonton businessmen who were keenly interested in providing sports and horse racing for many years out of what was once the South Side Athletic Grounds. An oval track with a grandstand and other facilities where the now South Side Arena and Stratchona High School are located. This group eventually became dormant but they maintained their incorporation with but a few members remaining. The men mentioned above were the last of the group and they wanted to cease their operation.

SSAC President George Zaharia wrote to Treasurer Charles Howell in April 1990 wherein he outlined the need to raise funds for the purchase of a building from which the Club could operate and administer the hockey program. And, would the South Edmonton Athletic and Sports Association give favorable consideration to some financial support. This was followed by a meeting of the Alumni Board, SSAC Executive, many former members and players at the Strathcone Legion. The existing members of the South Edmonton Athletic and Sports Association were invited and Treasurer Charles Howell responded. During this meeting, a new Alumni Executive was elected with C.M. “Bill” Goode becoming President. Also, Charles Howell presented the Alumni with a $5,000.00 donation on behalf of his organization.

In April 1990, Earle Fladager was elected to President of the SSAC and he, along with Alumni President Bill Goode, carried on with meetings with Charles Howell and others of his organization. Finally, in August 1990, Earle Fladager and Bill Goode made presentations to the South Edmonton Athletic and Sports Association. Joe Caswell got that group together at the Strathcona Legion. Goode and Fladager made their presentations outliining the need for the SSAC and Alumni to have their own facility. The five (5) members present for that group agreed to donate the sum of $50,000.00 to the Alumni to combine with the SSAC funds to purchase a facility. This was eventually accomplished soon after and now the Alumni and the SSAC are joint owners of the property now being used as the “home” for hockey administration and operations.

The South Edmonton Sports and Athletic Association is now defunct but it is with sincere appreciation that both the Alumni and SSAC thank that organization for its most generous financial support.

What follows in this history of the South Side Athletic Club Alumni is the names of the Board of Directors since Incorporation, photos where they could be obtained and a new approach for the Alumni activity.