The Edmonton Oilers drafted Lethbridge Hurricanes goalie Stuart Skinner, who played for SSAC in 2011-14, in the third round, #78th overall in the NHL draft on June 23, 2017.  The road to the NHL for a goalie is hardly hearts and flowers.

OK, for Carter Hart it has been. 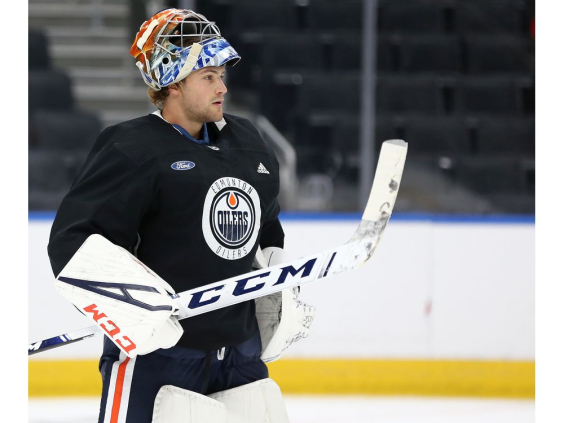 The 21-year-old Sherwood Park goaltender was a second-round pick of Philadelphia in 2016, went back to his WHL team in Everett for two seasons where he stood on his head, played just 18 AHL games at Lehigh Valley, and right to the Flyers as their starter.Hart has had some bumps along the road, like unfortunately in his first game in his hometown against Edmonton Oilers last fall. But, Hart generally has been excellent in his first two NHL seasons, the fast-lane exception while his friend and Oilers prospect Stuart Skinner, also 21, is the slow-and-steady rule.

Bide your time in the minors. ECHL, then AHL, then maybe NHL to back-up, then…

Stuart Skinner is an Edmonton resident who played for the South Side Athletic Club.

The Oilers used the 82nd overall pick acquired in the trade with St. Louis for Nail Yakupov to package with the 126th pick in the draft and acquire the 78th pick from Arizona. We congratulate Stuart for this achievement.